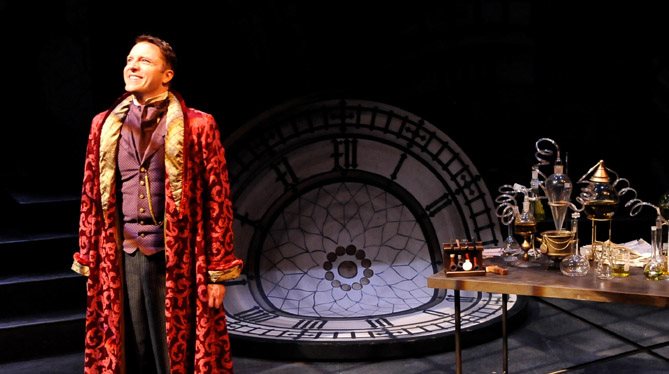 Mark Uhre plays a marvellous Sherlock Holmes in the Chemainus Theatre Festival’s production of ‘Sherlock Holmes and the Case of the Christmas Carol’.

by Andrea Rondeau, The Citizen

A clever idea and a really clever script, along with great performances make Chemainus Theatre Festival’s Sherlock Holmes and the Case of the Christmas Carol just the heartwarming, fun event to put you in the Christmas spirit.

Charles Dickens’s A Christmas Carol is a classic tale so wellknown that it can start to cause fatigue when one contemplates seeing it – again.

But by marrying that tale with the characters of Sir Arthur Conan Doyle’s world of Sherlock Holmes, the whole thing is new again in all the best ways.

The great detective himself takes on the role of Scrooge, and playwright John Longenbaugh makes Holmes’s Christmas miserliness both sad and laugh-out-loud amusing at the same time.

Holmes’s disdain for politeness and courtesy come out in acerbic dialogue witty enough to be funny, while the audience still understands and empathizes with their devastating effects on his friends.