Home/2018 Season, About the Shows, Uncategorized/Grease in Chemainus
Previous Next 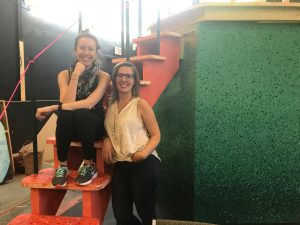 Julie and Barbara take a quick break during Grease rehearsals on the (in-progress) set.

Thank you to Barbara Tomasic and Julie Tomaino, the Director and Choreographer of our upcoming production of Grease for answering a few questions!

Barb: I think the spirit of being a teenager, trying to figure out who they are, is still the same.

Julie: I think there are so many popular fifties songs in this show that are still widely listened to now.

Barb: When I was in grade 7 I watched the movie 8 times in one night at a sleepover. I remember thinking it was such a risqué movie, and marvelling at the freedom and joy of the teenagers.

Julie: there is such iconic choreography in Grease, and of course I’m going to pay homage to the original, but with a twist. I like to challenge myself as a choreographer with movement that tells the same story in the style of the show but with my stamp on it.

Barb: our set designer Lauchlin has based the set on a photo of Sandra Dee that I chose. I think this photo is a strong representation of the colour palette and style of the time period. We’re also using images from advertising from the fifties and of course the costumes.

Julie: yes. Because I need to know all the accents and orchestrations so well I had ALL the songs running through my head for over a month. Today, it’s We Go Together.

Barb: Freddy My Love is the one I’ve had over and over in my mind.

We’re both happy to back in Chemainus, a town we hold close to our heart.