Dance can be a way to express our deepest emotions – joy, love, and sometimes even sadness. We dance at weddings, birthdays, and great celebrations. There is a sense of abandon when we dance, a loss of intellectual control.

Footloose is a story about dancing, but it’s also about a family and a town that is grieving a great loss. It’s a story about how fear and grief can cause us to control the things around us, when what we really need is to let go.

I love this story and I’m so grateful to be telling it with the team here in Chemainus who are so generous of spirit and creativity. It takes me back to my teens, a time when, as an adolescent, I struggled to make the adults around me see what I believed to be the truth. I didn’t understand that they were dealing with their own emotions and fears and that perhaps there was a meeting ground where we could connect and learn from each other.

It is also a musical filled with love, heart, and open youthful energy, something that we can all use a bit of in our sometimes challenging and adult lives. So, we invite you to let that energy take you beyond your worries and cares and CUT FOOTLOOSE!!!

Feel free to dance in your seat.

I’m thrilled to be making my debut at CTF with this terrific cast and creative team! Favourite credits: Cathy – The Last Five Years, directing Crazy for You, Goblin Market and completing my MFA at UBC. Upcoming: Directing The Music Man at Gateway Theatre this winter and 42nd Street at Studio 58 in the spring. Thanks to my friends and family, and my team at Da Costa Talent.

Chemainus Theatre Festival Society is a not-for-profit registered charity and ticket sales covered roughly 81% of our expenses in 2015. Every year we raise funds to help cover the remaining expenses.

This year we are holding a Giant Book Sale Fundraiser on July 9th in front of the theatre and we need your help.

We are looking for books of every imaginable genre, in both soft covers and hard covers. If you can donate your used books, they can be dropped off at our Administration Building 9574 Bare Point Road Chemainus, Monday to Friday 9:30 am to 4:00 pm.

Thank you for your generous patronage and support!

Kick Off Your Sunday Shoes with Footloose! 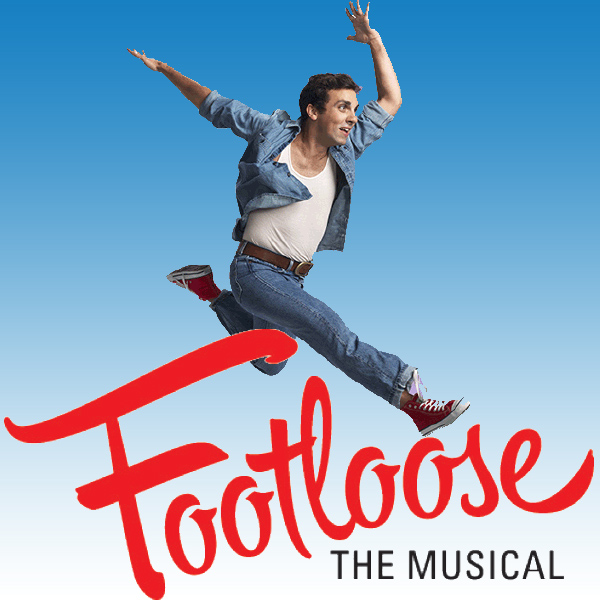 Footloose, The Musical, will give you more flashy dancing, live rock music, and a powerful experience of the sweet story that made the original movie a world phenomenon.

Musicals adapted from movies are popping up in theatres around the world. And that’s no big surprise. Classic song and dance shows like 42nd Street, The Producers, and Singing’ in the Rain have been adapted from other sources for decades (including books, song, and radio).

What is changing is that the adaptations are more frequent, and springing from more modern films (The Lion King, High School Musical, South Park). We think that’s good news. The live telling of a terrific story is the best form of entertainment, and we’re thrilled to see more crossover!

In the tradition of great screen-to-stage adaptations, we’re excited to bring you Footloose. In today’s show, you’ll find the plot stays faithful to the 1984 film’s spirit of youth, rebellion, and romance. However, you’re in for a treat as the adaptation includes some clever improvements. Footloose, the musical, will give you more flashy dancing, live rock music, and a powerful experience of the sweet story that made the original movie a world phenomenon.

Bringing a major Broadway production to our stage is a big task. Our greatest thanks goes to our artistic team, actors, production team, sponsors, volunteers, and all those who have truly “kicked off their Sunday shoes” to make the show sizzle.

And thank you as always to our audience. We couldn’t be happier that you, too, like it live.

Member Events: May 20th Mix & Mingle with the Harvey Cast

A quick reminder that there is a member event on May 20th at 4:00pm. We will meet in the Member Lounge for a Wine & Cheese mix and mingle as well as a Q & A session with actors in our production of Harvey.

Review: Harvey is Not All Black & White 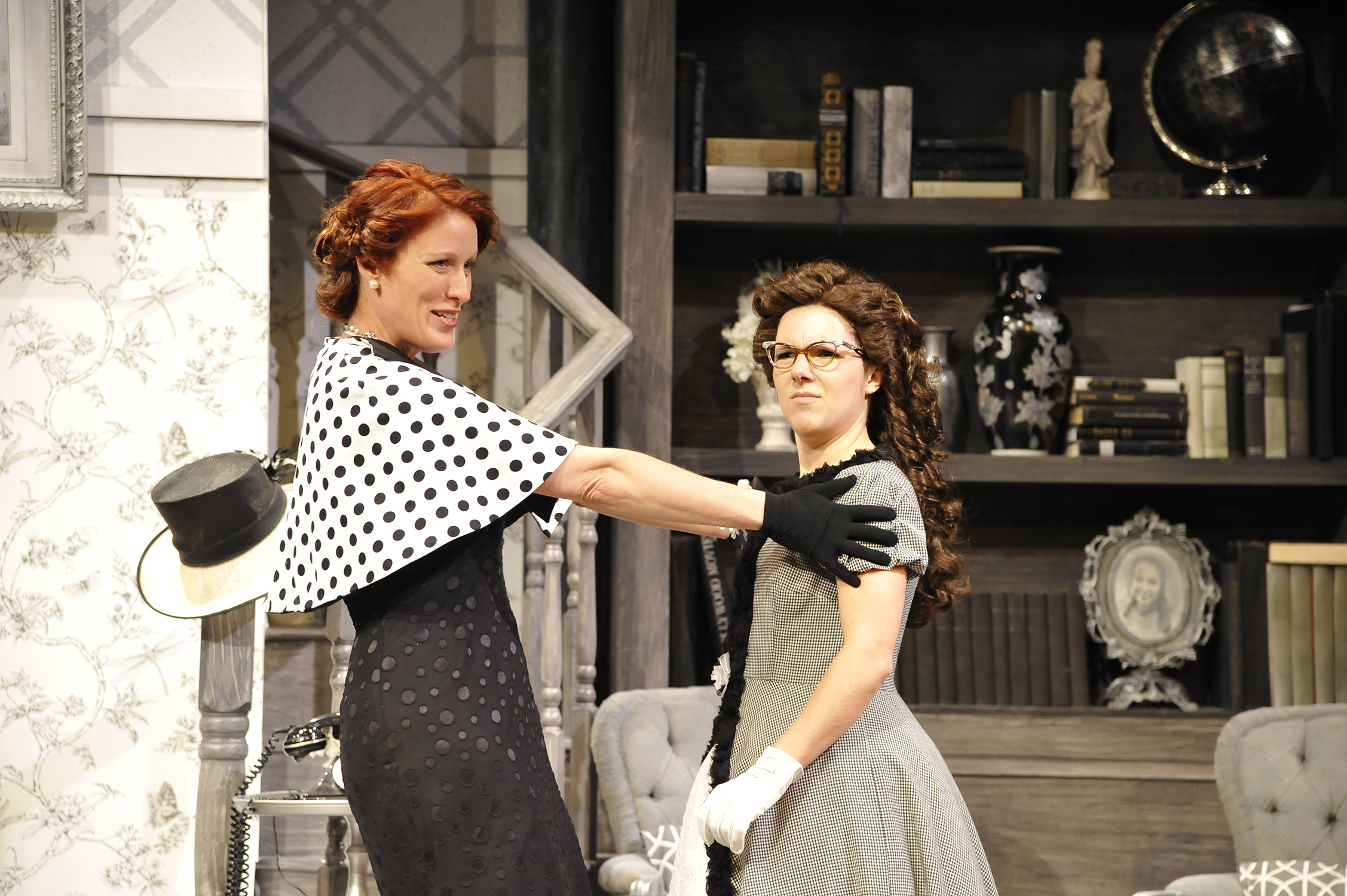 Erin Ormond and Ella Simon start out seeing the world in black and white but before long, their characters’ lives take on a more colourful tone. Photo: Cim MacDonald

All is not what it seems in the Chemainus Theatre Festival’s presentation of Mary Chase’s play, Harvey, which runs until May 28.

Of course, it all starts with Harvey, the six-foot white rabbit, who can apparently only be seen by Elwood P. Dowd, but the story unfolds surprisingly from there.

“He’s nuts, he needs to be committed,” claim Elwood’s relatives, Veta (Erin Ormond) and Myrtle Mae (Ella Simon), but once the audience meets Elwood, they realize he’s a pretty cool guy, for all his oddities.

This production welcomes the Festival’s artistic director, Mark DuMez, back to the stage in the role of Elwood, and there couldn’t have been a better choice to breathe vibrant life into the gentle fellow with the imaginary pal.

All DuMez’s own well-known courtliness is a superb asset in this production; Elwood looks on the world through his own colourful kaleidescope.

And colourful is a key word here.

When the play begins, the set and the characters, are monochromatic, indicating subtly the sterility of their lives.

The only dash of colour is supplied by Elwood with his brilliant turquoise sweater and socks. Slowly, as the scenes change, more and more colour is added to the costumes and the set as his exuberant life flows outward, warming the world around him.

But no one sees it.

Veta is obsessed by trying to climb the social ladder, but, in some of Erin Ormond’s best work at Chemainus, we see that she’s not as sure of herself as she hopes to portray.

As her daughter, Myrtle Mae, Ella Simons is in her element, bringing all her delicious abilities in physical comedy to bear.

At the sanitorium, Bernard Cuffling as Dr. Chumley, Mack Gordon as Dr. Sanderson, and Jay Clift as Duane Wilson are ably joined by Simon in her other role of the flirtatious Nurse Kelly.

There’s an element of French farce to this play: people are whisked on and off stage through doors, but Elwood meanders surefootedly through it all without even realizing he’s in any danger.

In fact, it’s his family who realize they are in danger as the play nears its conclusion, and act decisively to bring this fun evening to a surprising conclusion.

This comedy has a lot to say, comments star, artistic director

Older theatregoers may feel they know the story or even have seen it on TV.

“They did a movie of it with Jimmy Stewart and also did a remake of the play when he was older. But the original play came before the movie; Mary Chase wrote it in the 1940s. What I’m finding is that a lot of people have a vague, or a fuzzy memory of something about a rabbit,” he said, adding that the story stands up well.

“The premise has a lot to say. It’s a really interesting and engaging comedy in its own right. The idea that Elwood sees a white rabbit that he hangs out with and is one of his best friends taps into Celtic mythology and into the trickster legends of other cultures. But, of course, there is also the question: is he mentally ill or does he have a drinking problem? And how does that impact his community and his family?”

The possibility of mental illness may sound a bit grim, but this is a comedy.

“I say it’s got a lot of hop, when I’m being facetious. It’s got a lot of bubble,” DuMez said. “It’s funny. The characters are very sturdy, they have very strong agendas. And the actors, the company we’ve got, are all people I’ve been on stage with or had the pleasure to direct. That’s making it a lot of fun.”

The costumes are gorgeous and they’ve been working with two revolving sets, he said.

“I think the play leaps off the page a lot; for being an old play, it really pops.”

Younger audiences who’ve never heard of Harvey, or the concept of an imaginary friend, can just sit back and enjoy the comedy, he said.

The idea of having an imaginary friend can be found in many cultures, and at many times of life, but “if that friend is substantial enough in your imagination you have to question if it’s imaginary or not. That’s what the story plays with,” he said.

And then, there is the utterly useless “reality” of the social climbers in the story.

“That allows people to consider the idea: if we don’t have kindness, what are we living for? To be present with people in the moment is important.”

Wearing his artistic director’s hat, DuMez said he’s delighted with the way this season is going at Chemainus.

“It’s been wonderful. Last season was good and I think we’re reaping some of the benefits of that audience loyalty and enthusiasm. We’ve had a great start to the season this year. It’s been really fun, and we’re hoping for more of the same.”

All the Magic Possible

I had two imaginary friends growing up: Lulu and Jyson. Turns out my older sister had a couple as well: Teeman and Coca. Naturally, when my little brother came along, I assumed he would introduce us to his invisible pals. I waited. He grew. Started talking. But never mentioned his imaginary friends. Because – shocking! – little bro didn’t have any. No lack of imagination on his part; that boy has always been very good (scarily good…) at talking himself out of sticky situations. But when I asked him what his friends’ names were, he had no idea what I was talking about.

Wanting to fix what to me seemed desperately broken, I quickly bestowed three upon him: Ketchup, Mustard and Relish. But despite their great names, he wasn’t interested. He couldn’t see them, he said.

As an adult, I realize now: he had no need of them. For whatever reason – possibly my sister and I provided ample entertainment? – my brother was always perfectly at ease with the (visible) world as it was. I’ve always felt a little sorry for him, though.

May Harvey remind you of all the magic that is possible between people, both visible and invisible.

Julie is a director, playwright and performer, recently returned from the UK where she earned her Master’s degree from the University of York. She is a three-time Jessie nominee, was an apprentice at CTF in 2005-2006, and directed the holiday hit Countryside Christmas (2011). Her play The Out Vigil recently premiered in Vancouver, and was featured in the 2015 New American Voices Festival in London’s West End. For Lulu and Jyson.