Coming Up: Things Are About to Get Strange!

Elwood P. Dowd is unlike anyone you’ve ever met. He insists on introducing his friend Harvey to everyone around town – trouble is, Harvey is an invisible six-foot-tall rabbit.

Such eccentric behaviour just won’t do in the eyes of his easily embarrassed (and social-climbing) sister. Something must be done, and a trip to the sanatorium for an “cure-all” injection is planned. But things are about to get stranger yet.

See what happens when the real patient is mistaken, the doctors begin to behave oddly, and Elwood is suddenly as hard to spot as his imaginary friend.

Harvey is a Broadway comedy of errors with “unassuming charm,” (The Hollywood Reporter). The play, by Pulitzer Prize-winning author Mary Chase, promises to make you laugh as you wonder whether the world needs more “normal” people, or more “Harveys”?

Ring of Fire Reignites in April 2016!

Great music, memorable characters, and slice of life stories often win our favour, and hearts, at The Chemainus Theatre Festival. Imagine our thrill to discover that you, our patrons, feel the same way. Along with praise for the 2015 production of Ring of Fire, we received numerous requests and suggestions to honour the legendary Johnny Cash with a second run of the rockabilly musical about his life story.

For a show to take The Festival stage a second time it must offer a special kind of magic. It must be exquisitely performed, replete with emotion, and fondly remembered. Could this tribute to a wild, gentlemanly singer, songwriter, and rustic poet fit the playbill for a consecutive year?

It was an easy decision. One listen to the deep throttling voice of the American music legend and we knew that the acclaimed Broadway show deserved a second time in the spotlight. Now the challenge was upon us: to relight the original spark of sensation. Fortunately, the original production and artistic team also share our enthusiasm for Ring of Fire. We are excited to work with many of the cast and crew again, as well as welcome a few new talented people to the current production. Judging from their red-hot rehearsals, the best of the Man In Black is back. Thank you for joining us to relive the rowdiness, resilience, and iconic songs that punctuate the incredible life of Johnny Cash!

Members Get All the Perks!

The theatre is off to an excellent start in 2016 and (drum roll please) we recently set a new all-time record for season tickets, eclipsing the old mark set back in 2007.

An extra shout out is due to all of the donors who support our programming. Take time to peruse the list of amazing folks at the back of this program. If your name isn’t there, we would love to add it.

As a thank you to donors (whom we call Members), we bestow all sorts of special perks: advance access to tickets, advance notice of the season, and invites to interact with the stars of the Chemainus stage at exclusive Member events.

The Chemainus Theatre will only flourish with the support of its patrons. Give because the arts are worth supporting and give because it opens up the world of live theatre at behind the scenes events. After all, sometimes the best seats in the house aren’t even in the house.

Why We Tip Our Hats to a Tribute Show 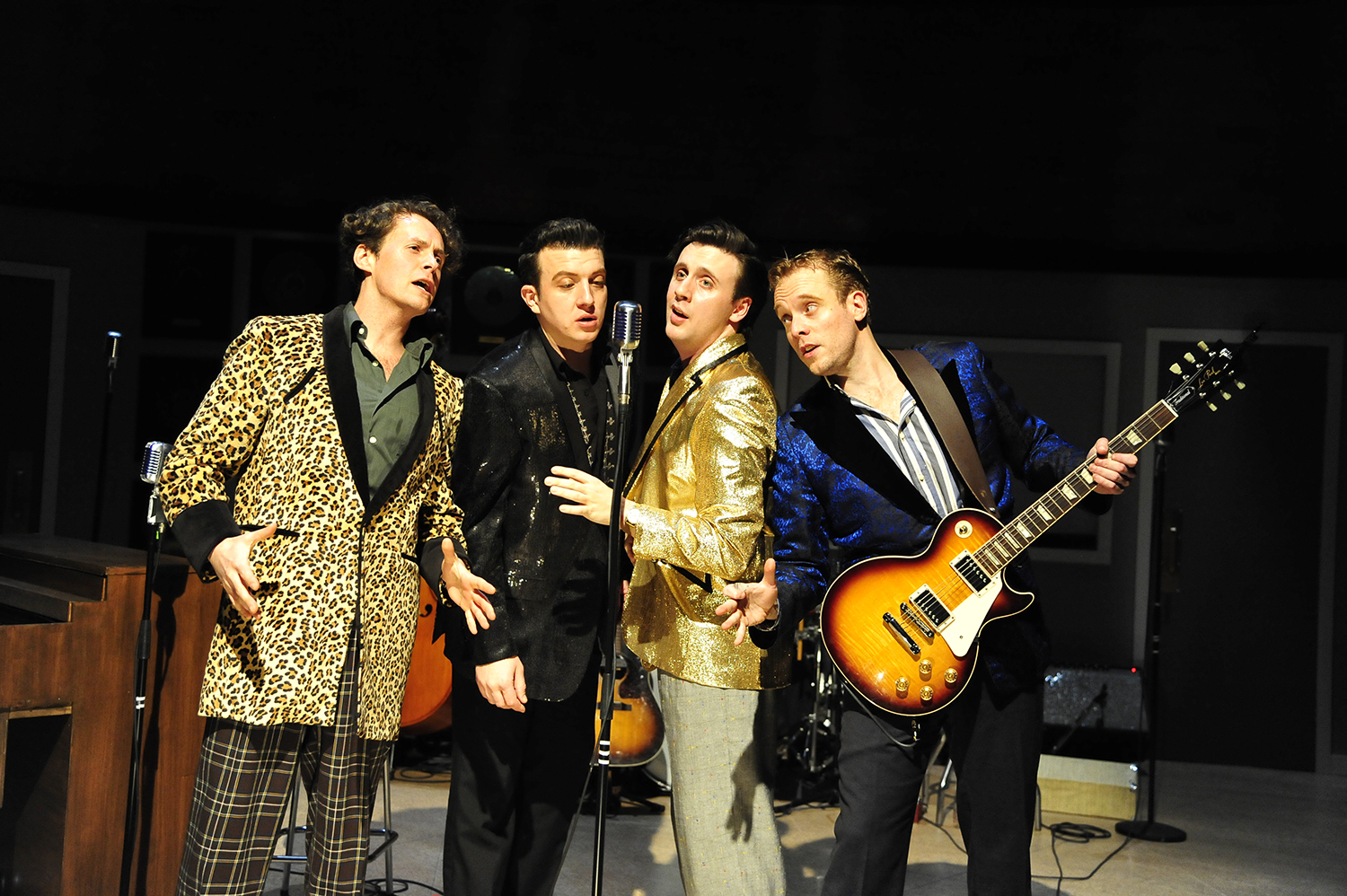 This appreciation for tribute-style shows is one reason we bring you Million Dollar Quartet and Ring of Fire: Project Johnny Cash.

What makes a tribute show stand-out? It is the way that music and background story intertwine. Unlike traditional musicals, the actors play the instruments, which defines qualities of their character and their journey.

Million Dollar Quartet is like four tributes in one, with the music and stories of iconic artists united by the coolest, coincidental event in music history: the day a young Jerry Lee Lewis was playing piano for a Carl Perkins recording session, when the sudden appearance of chart-topper Elvis Presley and rising-star Johnny Cash transforms the night into a red-hot recording session – thanks to the quick-thinking producer, Sam Phillips.

Ring of Fire: Project Johnny Cash reveals how cash went from a modest life of farming to one of influential fame – all based on his genre-busting sound that still kicks-it today. It is potent with the themes of love, faith, family, rowdiness, resilience through hard times, and redemption. The beauty of Johnny Cash is he let us hear many strands of a growing nation finding its groove. And there is something appealing about the idea of wild individualism set against the fabric of community.

We hope you are thrilled with performances of both these blockbuster Broadway hits – and all the incredible theatrical experiences we are bringing you in 2016.

A Peek into the Studio: Million Dollar Quartet 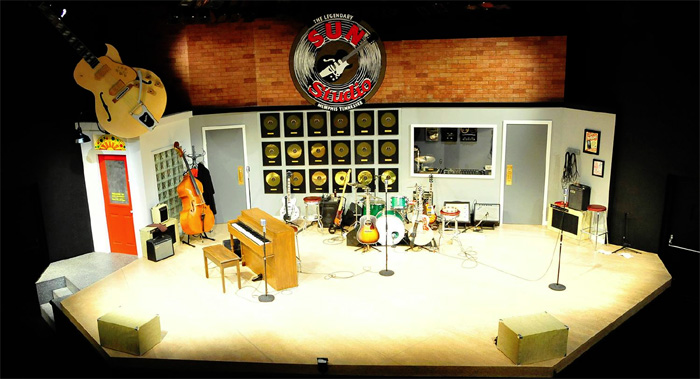 “Million Dollar Quartet is the inspiring tribute to a phenomenal moment in time.”

Million Dollar Quartet, currently at the Chemainus Theatre Festival until March 26, 2016 is a boisterous tribute to a seminal moment in rock ‘n roll history—brim-full of excellent musicianship, impeccable design and enough moments of nostalgia to satisfy fans of the era.

The legendary Sam Phillips of Sun Records (played here by Leon Willey in a splendid cajoling manner) certainly knew how to spot raw talent, and his myth-making abilities were remarkable. When he arranged for a reporter and photographer to snap the photo of Elvis Presley, Johnny Cash, Carl Perkins and the upstart Jerry Lee Lewis at a recording session December 4 1956, the significance would not be realized for decades. It took until 1981 for the session recordings to be released, and it wasn’t until 2006 that a regional theatre known for making musicals (several of which have gone on to Broadway stages and awards) — Village Theatre in tiny Issaquah WA–brought the story to the stage. Million Dollar Quartet debuted on Broadway in 2010. The Chemainus Theatre Festival Production is the Canadian début. By creatively stretching the truth, creators Colin Escott and Floyd Mutrux have crafted a highly entertaining show built around some of the greatest hits in the artists’ catalogues. Only two numbers—the Gospel classic Down By the Riverside and Brown Eyed Handsome Man—were in the original recorded session. Ascribing the role of narrator to Sun Records head Sam Phillips, sharing interesting tidbits about the young stars he discovered in a conspiratorial fashion, allows each actor to feature in a personal vignette.

The Chemainus Theatre Festival Production is the Canadian début.

Leon Willey (Sam Phillips). Photo: Cim MacDonald Playing Jerry Lee Lewis with all his flamboyant personality and self-assured and precocious talent, Montgomery Björnsson repeatedly flashes his most engaging smile in an attempt to win over the others, to no avail. This constant search for the spotlight and need for adoration sets up dramatic tension throughout the script.

Daniel Kosub displays a tight and contained energy as Carl Perkins, and his deft and soulful licks on the electric guitar are remarkable. His notable numbers include See You Later Alligator (featuring Kosub as Perkins and Alexander Baerg as Elvis) and the overlapping Sixteen Tons (with Jonas Shandel as Johnny Cash) and My Babe (Kosub) where the guitars appear to duel with one another.

Baerg as Presley has a frenetic energy on numbers like Hound Dog (glitzy lighting effects by Craig Alfredson) and That’s All Right with signature pelvic thrusts and wide-legged splits, and quiet introspection on Memories Are Made of This.

Shandel, last seen as The Man in Black in last year’s hit Ring of Fire, displays slow, honest, undisputable authority on Walk the Line and Folsom. Björnsson, like his namesake, brings down the house on Great Balls of Fire and Whole Lotta Shakin’ when he pulls out all the stops—playing the piano backwards and pounding the keys with his feet.

Meaghan Chenosky as Dyanne stands in for Marilyn Evans–a Las Vegas dancer and Elivis’ girlfriend at the time, who was not a singer. Chenosky’s sexy voice on Fever is shiver-inducing. The only female onstage, she is often coaxing and teasing the others into better behaviour, when she isn’t stepping outside to become their confidante in hushed tête-à-têtes, and is memorable in a role confined to the back pages of history (in fact it’s only after the success of Million Dollar Quartet that Evans was eventually located).

Kraig Waye (Brother Jay and also the musical director for the show) on bass and Scott Carmichael (Fluke) on drums round out the ensemble as the quintessential studio musicians, whole-heartedly and professionally committed to the task at hand.

Under the direction of Mark DuMez, the actors, much like the rock icons they portray, slip into a groove common to talented individuals—there is an evident ease and camaraderie among them that comes from knowing each other’s skills, and constantly pushing to improve the performance of the group. They share the stage easily, with deference and humility, seizing the spark of the original musicians.

When a sound engineer or live mixer does their job well, most audience members will never notice. Andrew Nicholls is flawless in the execution of his role, perfectly balancing vocal ranges and the numerous mics and instruments, further enhancing an already highly entertaining show.

The set design by Laurin Kelsey appears as if dropped from a 1950s time warp with glass block windows, walls decorated with gold albums, and a sound booth lit from within.

Costume designer Crystal Hanson has a lot of fun with the wardrobe, particularly for the finale when the four stars appear in glamourous and sparkly attire.
Montgomery Björnson

One glorious afternoon, four icons of rock ‘n roll found themselves in the same room, thanks to their mentor Sam Phillips. Million Dollar Quartet is the inspiring tribute to a phenomenal moment in time—captured due to the foresight of a seminal showman and promoter—one this Chemainus Theatre Festival production faithfully honours. In the mid-1950’s, four young and talented musicians met by chance, and made music history, in one red-hot jam session. Elvis Presley, Jerry Lee Lewis, Carl Perkins, and Johnny Cash are famous for their legendary songs and rock ‘n’ roll hits. Million Dollar Quartet is the acclaimed story about their astonishing careers and this landmark day in music history.