Summer Message from the Managing Director

Whether you’re here for the first time or your fiftieth, we’re elated that you’ve joined us today in Chemainus!

The show that you’re about to see is the culmination of a lengthy, intensive creative process. As much as two years can pass from the day that we obtain licensing rights for a production to the day that show opens.

All of our shows are fully professional with directors, designers and casts from across Canada. The full host of creative talent converges on Chemainus weeks before the scheduled opening, to rehearse and bring to life all those lines of text and bars of notes contained in the script. Over the course of a season, we employ over 150 artists to stage eight different theatrical productions.

The Theatre is fortunate to own all of the facilities that we require to create and perform productions. From the 270 seat main stage theatre that you’re sitting in today, to the rehearsal hall, costume shop, scene shop and offices all located a few blocks away next door to the Best Western Hotel – they’re all dedicated to providing you with an amazing theatrical experience.

The Chemainus Theatre is a registered charity, just the same as all Canadian theatres from the smallest to the very largest like the Shaw or Stratford Festivals in Ontario. We draw about 70,000 theatre-goers a year and you may be surprised to learn that we are the 3rd largest professional theatre in British Columbia.

This is all only possible with you – a wonderfully supportive and engaged audience. Thank you for attending and we hope you leave here today enriched, entertained and eagerly looking forward to your next Chemainus Theatre Experience.

I have been a fan of the British Invasion sound all my life, and many years ago I said to a close friend that I would love to pay tribute to that era with a show called Twist and Shout. Not sure what took so long, but here we are 30 years later. Okay, I’ve been busy! The inspiration for the show came to me when I attended a taping of the David Letterman show a number of years ago. It happens to be housed in the old Ed Sullivan Theatre on Broadway in New York City. I started thinking about the first time The Beatles appeared on that show, in that theatre – on February 9th, 1964. They actually played to a television audience of 73 million – the largest audience ever assembled in the history of American TV up to that time.

A lot of research followed and of course a show like this calls for a collaboration of sorts. I approached my good friend and one of Canada’s leading Music Directors, Bob Foster. When I told him my idea on how to approach the subject matter he immediately agreed to participate. He would write all the vocal and band arrangements. Soon after, Gino Berti joined the team as our brilliant choreographer. I also wanted to include some historic visual elements to the show so I contacted my colleagues Peter Conrad and Steve Kelly who excel in documentary production. One further piece of the puzzle was to involve Michael Bignell, a life-long friend who could contribute his historical expertise of the period.

The true British Invasion took place between 1964 and 1967 in America and this fresh sound would dominate the American music scene like nothing before or since. In a musical revue format of this period we pay tribute to all those great acts that forever changed the landscape of modern music.

This was a very important period of time in modern culture. Little did we know the arrival of The Beatles in New York would change the world forever. Over that four year period – and very much continuing today – the British Invasion influenced the music charts, the movies, and the fashion stores. When The Beatles led the Invasion in 1964 they provided us a fresh, exciting sound like we’d never heard before, creating a tremendous influence not only on the world of music but also on the whole of society.

We now ask you to sit back in this most beautiful theatre and enjoy a walk down memory lane. And please… feel free to Twist and Shout.

Review: The British are coming… to Chemainus!

by Lexi Bainas, The Citizen

The British are invading the Chemainus Theatre for a long summer run with starting on Friday, June 12 at 8 p.m. Twist and Shout takes you way back to the Swinging Sixties: to the days when mop-top haircuts and stylish mod suits and groovy new sounds gave notice that it was great to be young.

Groups like the Beatles, who took the American pop and RB sounds they loved and gave them a new kick, arrived in North America.

An adoring public rocketed their music to the top of the charts.

Sure, 50 years have passed, but everyone still knows and loves these tunes. So, for a really swinging summer, the Chemainus Theatre Festival is presenting as its 2015 blockbuster musical, Twist Shout: The British Invasion, an acclaimed song and dance revue that includes 64 all-time hits, and anecdotes about the music revolution.

Across Canada, Twist Shout has played to the delight of many, from nostalgic baby boomers to young generations who dig its retro-cool music. “In the summer, we like to give audiences of all ages a reason to take time for the theatre,” says Festival marketing manager Michelle Vogelgesang. “Twist Shout is a show that is both entertaining and a great story for a wide variety of people.” 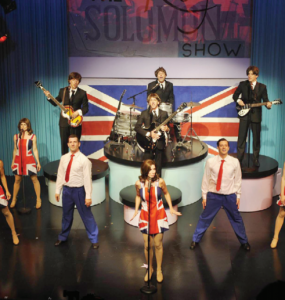 When I type “that was so much fun” after seeing the Chemainus Theatre Festival’s summer musical offering Twist and Shout: The British Invasion, I’m having to restrain myself from doing it in all capitals (shouting).

What the heck: THAT WAS SO MUCH FUN!

I was a little skeptical at the beginning of the theatre’s season when they announced this would be their summer show — typically their biggest production of the year. Not that a revue format with familiar tunes sounded bad, just that it was a huge departure from the last few years when they scored big hits with polished, mainstream Broadway shows like Fiddler on the Roof and Joseph and the Amazing Technicolor Dreamcoat, culminating in last summer’s amazing presentation of Les Misérables.

All my doubts were swept away when I attended opening night last Friday.

This show is spectacular. It has energy to burn and directs it skillfully into an extravaganza of multimedia music and comedy that’s the perfect complement to a summer night.

From the blockbuster opening number that will have you dancing in your seat to the finale, the exhilaration never fades, as performer after performer steps up to the mic to front a well-known, well-loved song and blows it away.

This isn’t simply a mimicry of musical greats, it’s a great cast with great voices evoking the feel of an era that not only changed music, but changed the world.

Summer Message from the Artistic Director

Summer in Chemainus, music that rocks and a collection of creative and talented people from across Canada making their home on Vancouver Island for the time. These are just a few of the reasons why Twist and Shout is a treat to produce on this lovely stage. From listening to the sounds and instruments of the era, to enjoying the tunes pumping out of the rehearsal hall – this summer is all about nostalgia, celebration and the robust energy that this time and music inspired.

After years of playing on the boards here in Chemainus, and now a few years and the occasional grey hair as Artistic Director – I am so thankful for the many friends this theatre has and how they support the work we do. During each season, I get to work with creative, energetic and passionate artists through planning, rehearsal and coordination with colleagues across the nation (including the good people at Ontario’s Drayton Entertainment and this show’s director – thanks Alex). We see thousands of people enter the theatre with anticipation and exit with delight. Thanks to all of you who are a part of the exchange through the rich, vibrant and exciting world we create, inhabit and enjoy here in Chemainus. Enjoy the show.

The British are coming! Don’t miss this irrestible piece of 60s nostalgia featuring 64 classic hits by The Beatles, Gerry & The Pacemakers, The Hollies, The Kinks, The Rolling Stones, and more!

About Twist and Shout: The British Invasion

How the music moved us

Popular music was never the same after the “British Invasion” of the 1960s. New artists, with groovy new sounds, flocked to North America – where an adoring public rocketed their music to the top of the charts. It was the start of a great music phenomenon.

Performers like The Beatles, the Rolling Stones, the Who, Dave Clark Five, The Searchers, Wayne Fontana and the Mindbenders, Donavon, Gerry and the Pacemakers, Freddy and Dreamers, Spencer Davis Group, The Hollies, and many more started the cultural revolution. Their vibe of British “beat” blended the United Kingdom’s dancehall, pop, and Celtic folk music with American-style rock and roll. The original sound spread rapidly from early 1964 through 1967 as young artists wrote up-tempo pop, powerful rock and roll, and jazzy electric blues.

In Canada and the United States, these radical new artists with distinctive accents, original slang, trendy fashions, and madcap personalities captivated people. England was suddenly the centre of the rock universe as hits streamed across the Atlantic and into homes, radios, and every consumable media. The cultural vibe changed forever, and changed for the better if you ask Canadian writer and director Alex Mustakas.

After a great deal of (enjoyable) research and creative collaborations, Mustakas had completed his musical revue. His tribute is an energetic, authentic, and acclaimed production that recreates the “British Invasion” with a dose of nostalgia and fun.

We’re thrilled to welcome the brilliant artistic team, performers, and audiences for this homage to the great acts that restyled the landscape of music. Get ready to Twist and Shout!