You’ll get more than you bargained for at Mr. Kim’s downtown Toronto convenience store. Along with his enormous variety of groceries and knick-knacks, he dispenses amusing folk wisdom, quizzical Korean trivia, and a peculiar type of pride. The hilarity and the business may be short lived if a big box store invades the neighbourhood, his daughter rejects the family shop, and his prodigal son returns. Is there a future for Kim’s Convenience?

Kim’s Convenience debuted at the 2011 Toronto Fringe Festival, where it won the Best New Play award. Written by celebrated Canadian actor, playwright, and poet Ins Choi, he also directed the play and acted the part of Jung in the debut production. The play has been produced all over North America to outstanding reviews. It has since become a ground-breaking CBC TV series which you can also catch on Netflix. As one review of an earlier production of this play states: “the comedy is funny, and the emotions genuine, and at its best, the play combines the two”.

Delivering amusing folk wisdom, quizzical Korean trivia, and touching on themes of immigrant experience, change, and generational conflict, Kim’s Convenience is as poignant as it is humorous. It breaks through boundaries and explores some universal truths in a way that brings the powerful combination of both laughter and learning to the audience.

Appa and Umma speak to each other in Korean, treating one another with tenderness and humour as they lead their little family toward the future while forgiving the past. Janet and Jung speak English, asserting themselves with the sharp wit of youth who identify with two cultures. What comes of it all are hysterically funny jokes and comedic situations which help the audience to more comfortably question our assumptions of stereotypes, immigrant experience and family conflict.

If you were able to catch our recent production of Once we hope you enjoyed the Irish comforts from the music to the on-stage pre-show pub experience. We also hope you saved room for dessert because the Chocolate Guinness Cake was melt-in-your-mouth delicious! The Playbill Dining Room is wonderful from the soup to the decadent desserts, so keep your eye on the ever-changing menu – everyone is welcome! Thank you to Pastry Chef Ally Taylor for sharing the recipe for the glorious Chocolate Guinness Cake served during the Once buffet!

Preheat oven to 350 Grease 9” springform pan with butter and line the bottom of pan with parchment paper.

In another bowl beat sour cream, eggs and vanilla until very well combined. Add the butter stout mixture and whisk together.

Allow to cool on a wire rack.

Mix Bailey’s Irish Cream into whip cream to top your cake if desired. 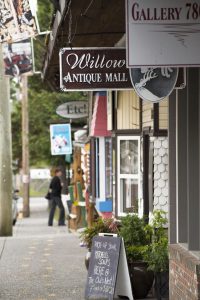 Chemainus is a highlight of many tourists’ holidays on Vancouver Island. It has wonderful shopping, great food, historic homes, and colourful murals providing a beloved ambiance. With the arrival of Spring Break and sunny days it is easy to see there are so many things to do in our little town. To make your trip here extra memorable we want to share with you our top 5 things to do before or after a show at Chemainus Theatre:

We hope you enjoy your next visit to Chemainus. We encourage you to take your time and stay a while to soak up that slow, small-town charm. The Best Western Plus offers great deals on your next stay – you can even book when you call the Chemainus Theatre Festival box office to get a great package deal. Drop in and say hello to the friendly folks at the Chemainus Visitor Centre while you are here too – they can give you more information about self-guided walking tours, dining and shopping option, local parks and more!