DID YOU KNOW? The true story of the von Trapp Family

Home/Uncategorized/DID YOU KNOW? The true story of the von Trapp Family
Previous Next

The film adaptation The Sound of Music was released March 2, 1965, and for many households, was the introduction to the von Trapp Family, and beloved classic songs such as “Do-Re-Mi”, “Climb Ev’ry Mountain” and “Sixteen Going on Seventeen”. However, while The Sound of Music was based on Maria von Trapp’s book The Story of the Trapp Family Singers (published 1949), there were a number of key differences between the true story of the von Trapp family, and that of the film and Broadway (first performed 1959) adaptations.

THE VON TRAPP FAMILY DID NOT CROSS THE ALPS TO ESCAPE THE NAZIS.
During the climactic scene of the show, the von Trapp family will flee Salzburg, Austria by hiking over the surrounding mountains. In real life, however, this would have lead the von Trapps into Nazi Germany, the very regime they were trying to escape! The real-life departure of the von Trapps was far less dramatic—in broad daylight, the family left their villa and crossed the railway tracks behind their home in order to board a train to Italy, under the guise of a family vacation. They did, however, leave just in time, as the next day the Austrian borders were sealed.

THE REAL-LIFE MARIA WAS A TUTOR TO ONE OF THE CHILDREN, NOT A GOVERNESS TO THEM ALL. 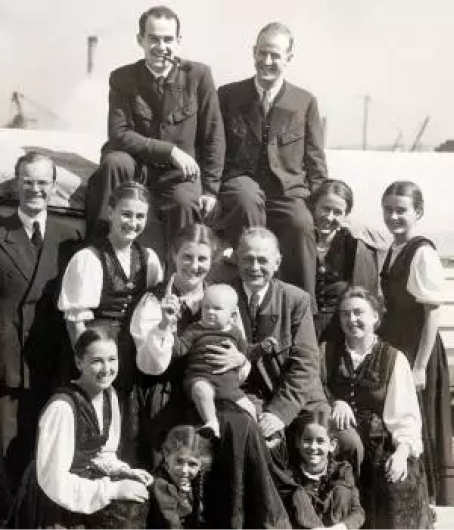 Georg von Trapp’s second-oldest daughter, Maria, contracted scarlet fever in 1926, and could no longer make the journey to school. Georg sought out Salzburg’s Nonnbery Abbey to find a tutor for his sick daughter. At this time, Maria Augusta Kutschera had entered the Abbey two years previous as a novice, and was the perfect candidate given her training at Vienna’s State Teachers College for Progressive Education. Her time with the von Trapps was to be a 10-month assignment before she formally entered the convent.

MARIA AND GEORG MARRIED LONG BEFORE FLEEING AUSTRIA. AND SHE DID NOT LOVE HIM—AT THE TIME.
47-year old Georg von Trapp and 22-year-old Maria Augusta Kutschera were married on November 26, 1927, more than a decade before they fled. Maria claimed she fell in love with the children at first sight, and she liked their father, but did not love him. Though, as the years went by, Maria did learn to love Georg von Trapp.

THE NAMES OF THE VON TRAPP CHILDREN WERE CHANGED IN BOTH THE BROADWAY AND FILM ADAPTATIONS OF THE STORY OF THE TRAPP FAMILY SINGERS.
Overall, there were 10 von Trapp children, not 7. The names, ages and sexes of the children were all changed. The oldest von Trapp child in real life was Rupert von Trapp, born in 1911 and a practicing physician by the time the von Trapps fled Austria in 1938.

Interesting Historic Fact:
While the von Trapps were offered many enticements by the Nazis—greater fame as a singing group, a position as a medical doctor for Rupert, a further naval career for Georg. The von Trapps knew they were on thin ice—they refused to fly a Nazi flag above their home, refused to sing at Hitler’s birthday party, and Georg declined a naval command. After weighing the benefits against leaving behind their family, friends, estate and all of their possessions, they decided they could not compromise their principles and integrity, and they left.

THE VON TRAPP FAMILY WAS NOT HAPPY WITH THE PORTRAYAL OF THEIR PATRIARCH.
The captain was a warmer father figure than he was made out to be. While he did carry a whistle, and did have a distinct whistle sound for each of his children, as well as dressed his children in sailor suits, he did not have them marching or standing at attention. Out of the two parents, Maria was the one with a cooler demeanor. Though she was a caring and loving person, the real-life Maria was also prone to fits of temper.

MARIA DID NOT BRING MUSIC TO THE VON TRAPP HOUSEHOLD.
The captain and his first wife (who died of scarlet fever) enjoyed music, introducing it to their children and household long before Maria came from the Abbey. Before Maria came, the von Trapp children already knew how to sing and played a number of instruments. What Maria did teach them was madrigals.
Madrigal: “a complex polyphonic unaccompanied vocal piece
on a secular text developed especially in the 16th and 17th centuries”
—Merriam-Webster

WHY DID THEY BEGIN PERFORMING?
What originally lead the von Trapp family to begin singing professionally was, like many families, the loss of their fortune in the Great Depression. The von Trapps actually took in boarders in order to bring in additional funds. One of these boarders was Father Franz Wasner, who would act as their musical director for over 20 years. The fictional Max Detweiler never existed in real-life. After fleeing Austria with the von Trapps, Wasner accompanied them on their tours of Europe and the United States.