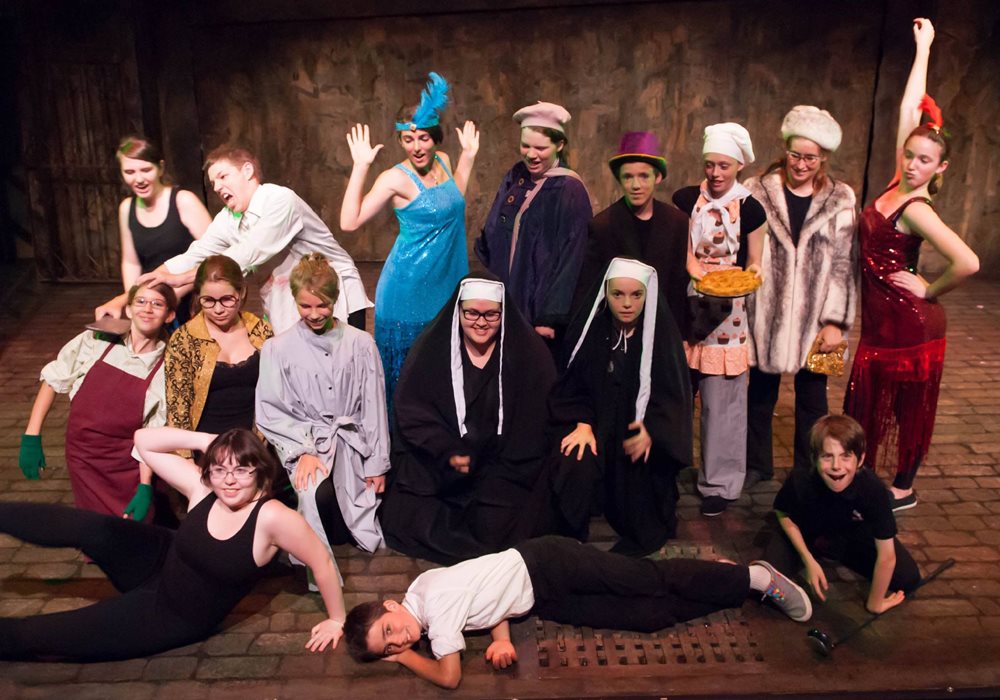 Join us for a weeklong celebration and exploration of what makes theatre so incredible! During the week we will utilize teamwork, collaborative skills, music, costumes, props, scene work, laughter and new friends to create our own musical production. Taught by industry professionals, as well as guest actors who are starring in Chemainus Theatre Festival productions. If you are between the ages of 10 and 18 years old, you are eligible and you won’t want to miss this camp experience!

This week long camp will culminate with the campers having an opportunity to perform in a final presentation of our own version of “Footloose” the Musical on stage at the Chemainus Theatre Festival The Theatre Camp will run Monday to Friday, July 18 – 22 & July 25 – 29, 2016 from 9:00 a.m. to 3 p.m. (Registration for the week of July 25 will open when the July 18 week is almost full.)

The students will gain an insider’s view into Chemainus Theatre’s production facilities as the camp will be held in our professional rehearsal hall located at 9574 Bare Point Road, Chemainus , BC.

MARK DUMEZ
A sweeping statement: Science often discounts mystery. The quest for knowledge might sweep the jester off the stage, clean up the fool and try to cleverly eradicate, through measure, fact and study, the place of the trickster. Some think the more we know – the more we know. Others are of the mind that the more we know, the more there is to discover. And in this dance of knowing and not knowing, we might be mindful to keep the jester at the party.

Enigma, myth, the profound mystery – the wise recognize at some point that we are not as big as we think we are. The trickster, in many cultures, helps to illuminate this child-like understanding.

And so, we welcome Harvey. Like Shakespeare’s Puck – he is a Pooka. And, in being a thing unseen for some and seen for others, examines our faith in what is beyond the regular senses. Perhaps he is a mask for a drinking problem, perhaps a debilitating mental illness, or, in another reading of his antics, a bearer of light and levity into Elwood’s once dreary life – enabling him to be present with all. If the latter, wouldn’t you like to meet him? It’s been a thrill to tread the boards again – enjoy the show!

Welcome to 2016 From Our Managing Director

We couldn’t be more thankful for your show of support by attending today’s performance.

The theatre is off to an excellent start for 2016 and (drum roll please) recently set a new all-time record for season tickets, eclipsing the old mark set back in 2007.

We send an extra shout out to all of the donors who make charitable gifts to support our programming.  Take time to peruse the list of amazing folks at the back of this program.  If you’re names not there, we would love to add it.  As a not-for-profit, we rely on charitable support to provide a financial base that allows us to plan ahead with confidence and continually pursue artistic excellence on stage and off-stage through various outreach opportunities.

“The perks build from there as we strive to pull back the curtain and provide exclusive access to interact with the stars of the Chemainus stage.”

As a thank you to donors (whom we call Members), we bestow all sorts of special perks: including being first to hear company news such as the season announcement and advance access to tickets for hot selling shows.  When two shows were added to our sold out run of Elf the Musical, Members had first crack at snapping up the seats.

The perks build from there as we strive to pull back the curtain and provide exclusive access to interact with the stars of the Chemainus stage at exclusive Member-only events.

This year we’ve added a few new events – including a workshop and play reading in Victoria and our inaugural Member Day in July. Member Day will provide a chance to experience the inner workings of the costume shop, rehearsal halls and scenery shop followed by a time to dine together in the Playbill before taking in our summer blockbuster Footloose.

The Chemainus Theatre will only flourish with the support of its patrons.  Hopefully this has enticed you to look in to Membership.   Give because the arts are worth supporting and give because it opens up the world of live theatre at behind the scenes events.  After all, sometimes the best seats in the house aren’t even in the house. 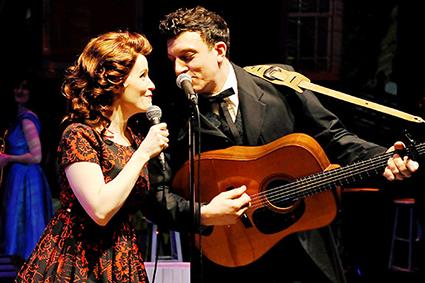 Johnny Cash (Jonas Shandel) partners for a duet with June Carter (Samantha Currie) during ‘Ring of Fire’. The show is a musical journey through the life of Cash, a country music legend. It plays April 6 to 23 at the Chemainus Theatre.

The ultimate tribute to Johnny Cash will be back in Chemainus by foot-stompin’ demand.

Ring of Fire runs April 6-23 at the Chemainus Theatre Festival, featuring many of Cash’s greatest hits woven together with his fascinating life story from farming to iconic superstar.

“It’s not extremely heavy on story, but through a series of little interludes and vignettes it takes you through his early life in Arkansas through to the beginning of his musical career in Memphis, of course some of the Gospel songs in his career. Then as the show progresses it lightly touches on some of the troubles he went through, obviously his relationship with June Carter.”

The show features over three dozen Cash songs including such favourites as ‘Walk the Line’, ‘I’ve Been Everywhere’, ‘Country Boy’, ‘A Thing Called Love’ and, of course, ‘Ring of Fire’.

“It’s really interesting. You really get a chance to touch on all the genres and the different styles that he was able to incorporate into his career over the decades,” Waye said. “You get a little flavour of his Gospel roots and his early boom-chicka-boom, the train chuggin’ country, and then even some features later like the ’70s country like ‘Man in Black’ and the Kris Kristofferson song ‘Sunday Morning Coming Down’. There’s even a murder ballad in the show, the song ‘Delia’s Gone’.”

The cast includes artists who will be familiar to the audience and newcomers to the festival stage. Performing stories and songs that were stepping stones on Cash’s journey are Alexander Baerg, Timothy Brummund (as narrator and voice of Cash when he looks back), Scott Carmichael, Andrea Cross, Samantha Currie (as June Carter), Daniel Kosub, Mark MacRae and Jonas Shandel (as the up-and-coming, youthful Cash).

“There’s one who’s playing sort of the younger Cash, that’s Jonas Shandel, so he does the bulk of the lead singing and then the other is Timothy Brummund, who acts as the narrator and also the older conscience of Cash, the reflective version,” Waye explained. “The rest of the folks lend wonderful support in various roles musically and through some of the scenework.”

The show runs around two hours and has been a pleasure to musically direct, Waye said.

“It’s been fantastic. This show’s a real treat,” Waye said, adding that his good friend Zachary Stevenson who directed last year’s Ring of Fire gave him a number of helpful tips in the runup to rehearsals. “I’m putting a little bit of my own flavour in, but a good majority is just to stay true to Zach’s vision from last year,” Waye added.

Conceived by William Meade and created by Richard Maltby Jr., Ring of Fire is a musical biography that portrays a story about hitting rock bottom and finding the faith to carry on.

“We’re excited to bring this show back for a second season,” said Sales and Marketing Director, Michelle Vogelgesang. It’s exceptionally performed, and many people asked to see it, both again and for the first time. It seems that everyone can connect with his character: as a wild gentleman, a rustic poet, a saved sinner, and an American music hero.”