I’ve been thinking about murder mysteries, these curious things that many of us find intriguing and, at times, a kind of obsession. Who did it? How? Why? The questions reveal in us a want to explore the unknown and the safe thrill of exploring an abominable act from a distance. If you trace the origin of the word mystery, you will find it linked to mystical secrets and truth. In the same way, the word murder weaves a trail through Norse and Old English and can be associated with mortal sins. This little game that we play with Agatha Christie and many other great writers of this genre is a way to explore our own mortality and sense of trust. It’s also great fun!

Everyone has a secret. We can never reveal all of ourselves in any given moment and, despite strategic plans and long-term goals, we rarely see ahead with 100% accuracy. It’s why hindsight is always 20/20. We might run from, or embrace, mystery. In this play it may be buried under layers of deceit, hidden in cracked dialects and details or out in the open for anyone to discover. In the large house with strange company, no one can be trusted – but everyone must be relied on to reveal the killer. I hope you enjoy the game – first performed in 1952 and still going strong. Welcome to The Mousetrap.

Mark is a proud resident of Vancouver Island and has enjoyed directing Sherlock Holmes, Jeeves in Bloom, A Pretty Girl (A Shayna Maidel), Delicious Lies, Harvest, The 39 Steps and Amadeus for Chemainus Theatre. Other favourites include: A Christmas Carol, Strindberg’s Easter, Anne, Mr. Pim Passes By and Pet the Fish. He has collaborated with companies including Theatre X, Pacific Theatre and TheatreOne to develop over a dozen new plays. Favourite acting credits include: Mass Appeal, Enchanted April, Queen Milli of Galt and Streetcar Named Desire. 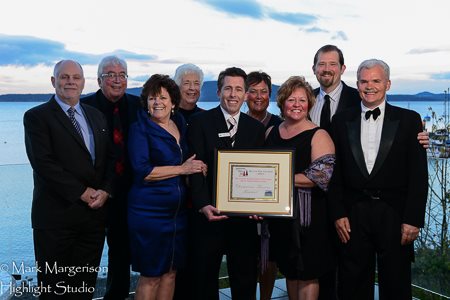 This week we were humbled, honoured, and very excited to receive the award for “Business Achievement 20 or More Employees” at the Duncan Cowichan Chamber of Commerce Black Tie Awards. What a great feeling to be a part of such an amazing non-profit organization and to be recognized for our work.

This is a video of the change over between Les Misérables and Over the River and Through the Woods. The video, from last year, gives you an idea of what’s happening right now, as we transition from Ring of Fire: Project Johnny Cash to The Mousetrap. Watch the transformation that takes place over just five days!

Spring Message from the Managing Director

Welcome to the world’s preeminent whodunit – Agatha Christie’s The Mousetrap and I can’t think of a better way to follow up the runaway success of Ring of Fire. Now in its 63rd year in London’s West End, The Mousetrap is the world’s longest consecutively running play for very good reason… as you’re about to discover. One warning is that this run in Chemainus won’t be nearly as long so please tell your friends to book in soon because the show must close May 30 as we prepare for the British invasion.

Volunteer appreciation week is in April and that’s one of my favorite quotes about the value of volunteers. Volunteers have truly kept the good ship Chemainus Theatre afloat through our first 23 years. There’s no doubt in my mind that we wouldn’t be here today if it wasn’t for the selfless contribution of volunteers. This past year alone 154 people volunteered a total of 6,127 hours. Checking coats, showing us to our seats, building costumes, pulling weeds, helping in the office, serving on the board of directors… no task is too great or too small.

Volunteerism is one of the things that makes Canada the greatest place to live on Earth. Each year 12.7 million Canadians give 2 billion hours of time. Next chance you have be it here or elsewhere, say thank you to the volunteers who are giving their time to make your life better.

It’s time to sit back, relax, and enter fully into the world of the play. Thank you for joining us today and by doing so, supporting live professional theatre on Vancouver Island.

Shuddering suspense and suspicious characters (with sordid pasts) – Christie’s greatest mystery is back! There’s a shot. And a scream! A murder has been committed, and the clues suggest that more victims of vengeance will soon fall.

At Monkswell Manor, a snowstorm is raging and has confined eight people (or, shall we say, suspects) to the old boarding house. The situation is indeed miserable – and quickly becomes murderous as a series of betrayals begin to unfold. Can you identify the killer?

Everyone is suspect, including the newlywed proprietors, the curious spinster, the wanna-be chef, a retired Army major, the miserable jurist, a strange lost motorist, and a police detective whose arrival offers anything other than safety.

Who will escape, and who will get trapped for good, when the world’s longest running play reveals its final twist?!

The Mousetrap, a classic Agatha Christie tale of intrigue, has been playing consecutively for over 60 years around the world. The production is returning to The Chemainus Theatre Festival stage, April 24 to May 30, 2015, due to popular audience demand. Also returning for this brilliant play are a superb cast of actors, including: Jay Lift, Chris Cope, Bernard Cuffling, Victor Dolhai, Ruby Joy, Leala Selina and Matthew Hendrickson.

Tickets are available now online and at the Chemainus Theatre Festival box office.