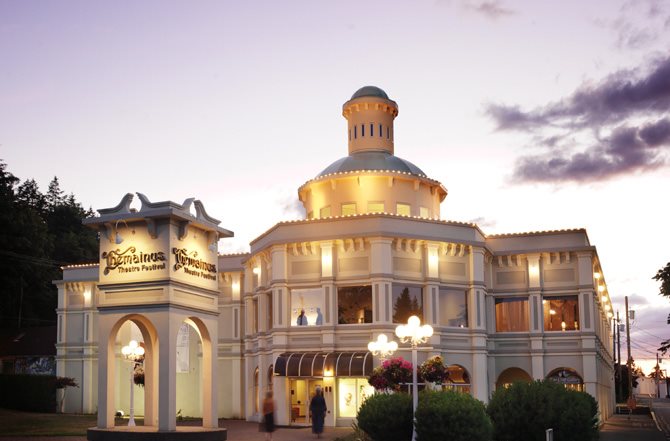 The Story of the Beginning of the Chemainus Theatre

My wife, Ruth, and I began travelling through Chemainus in the mid 1950s on our way to Thetis Island to help construct and develop the new Christian youth camp “Pioneer Pacific”.

A Mr. Adam Hunter, who owned a good part of Thetis Island inherited by his homesteading father, gave 67 acres of beautiful waterfront property for this purpose knowing that it would be for the glory of God and moral strengthening of the youth of this generation. Chemainus was almost a ghost town as the giant lumber mill had fallen on hard times.We later became aware of the revitalizing mainly through the incorporation of murals instigated by Karl Schutz. This attracted many artists and others who appreciated the renaissance and flowering of the human spirit in the arts. We became aware of this growth and concentration and wanted to be part of it. If a number of painters all moved to Chemainus, they could form a community together for mutual help and inspiration. We contracted about 20 individuals who thought it was a great idea but they decided to be content where they were and so nothing became of the idea and we waited for further inspiration. One Sunday in the summer of 1990, we attended the little community church on Thetis Island at which time Mr. Greg Perry, a lay preacher, was speaking. His theme was,“trusting God when you don’t know the future”. He gave his own experience of being recently appointed a theatre teacher in Alberta at the Rosebud School of the Arts and then shortly after having to go to the director of the school, Mr. LaVerne Erickson and had told him that he thought God was calling him to accept the position of director at Camp Columbia on Thetis Island.

Surprisingly, LaVerne took this very calmly and said that the Lord would surely send someone else to replace him. This strong faith touched me and so after the service I obtained LaVerne’s phone number to find out more of the vision and operation of the school. It turns out they were looking for a second site, a place where their graduating theatre students could find employment (Lucia Frangione, the now humorous theatre playwright and performer was their first graduate). I was more touched by their vision and results and decided that Chemainus could be a new centre. At first we tried to rent space, but that was without success and so street theatre was the first summer’s venue.

Meanwhile we became friends with Dan Sawatzky, a high energy, creative genius and one of the mural promoters, who began to draw sketches depicting a dream about building our own theatre. Two sites were considered, one right in town at Victoria Street and Old Chemainus Road, and the other at a four-acre site at Oak Street and Old Chemainus Road. Dan strongly recommended the in-town site and Shane Davis, a Duncan architect, was chosen to work with Dan on the plans. The dome and name tower at the entrance were Dan’s imprint and he later built the tower part and gave it to the theatre. How would this project be financed? Our family foundation, Oswald Smith Foundation, after selling some property in Vancouver, agreed to build the structure, and then lease it nominally to the theatre. But the operation was financed by forming a venture capital company where 30 per cent of the costs were returned to the investor. This was, remarkably, approved as a tourist attraction in Chemainus, because theatres and restaurants were unacceptable.

We called bids for construction and it was won by Nicon Developments Ltd., a Duncan firm who performed admirably and we have a beautiful building which won an award as the best building on Vancouver Island in 1993. Gary McLeod was the efficient project manager. We were able to overcome several fire by-law and other changes and the project was completed for the grand opening in June 1993. One unfortunate accident was the near fatal roof accident suffered by LaVerne Erickson in December 1992 at Rosebud, but he recovered and was able to resume preparations for commencement assisted by his brother Tim Erickson. Market acceptance was very slow, and some of the ideas from Alberta had to be adapted for local conditions and through the Venture Capital channel we had to cover several million dollars in operation losses personally, over about the first five years. Then, Revenue Canada changed the charitable donation formula to 75 per cent of one’s income so we formed a theatre charity for the operation and then went to the public for support as we now were well recognized as a major positive contribution to the community and all of Vancouver Island.

About six months after the official opening, a young Alberta accountant, Randal Huber was hired and he later became the Managing Director of the Theatre.