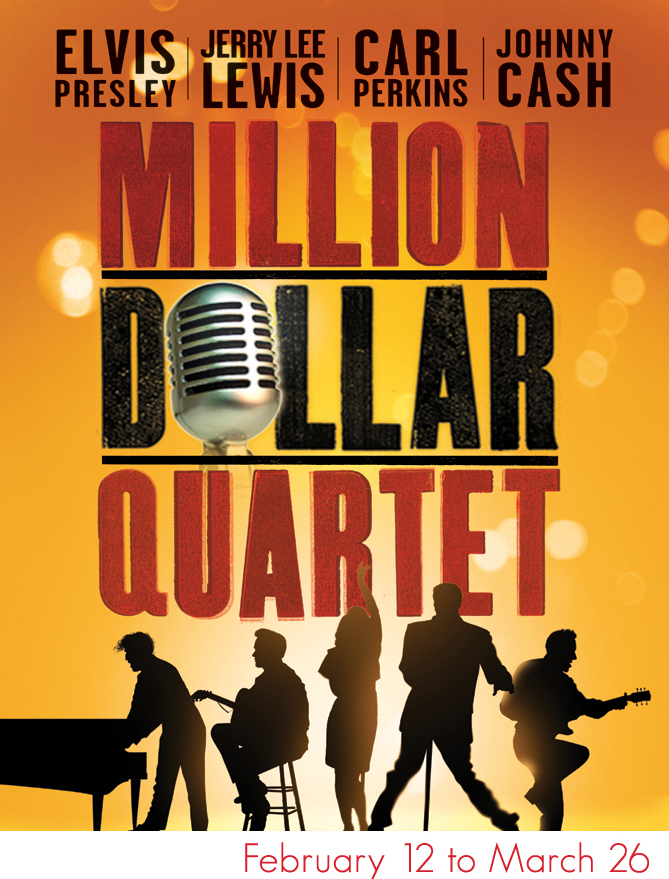 Get ready to become flies on the wall of a landmark day in American musical history.

This appreciation for tribute-style show is one reason we bring you Million Dollar Quartet.

Get ready to become flies on the wall of a landmark day in American musical history. A young Jerry Lee Lewis is playing piano for a Carl Perkins recording session, when the sudden appearance of chart-topper Elvis Presley and rising-star Johnny Cash transforms the night into a red-hot recording session – thanks to quick-thinking producer, Sam Phillips.

Sixty years later, these songs (and many more from each artist) have won hearts and whipped crowds into frenzy.

What makes a tribute show stand-out?  It is the way that music and background story intertwine. Unlike traditional musicals, the actors play the instruments, which defines qualities of their character and their journey.

Million Dollar Quartet is like four tributes in one, with the music and stories of iconic artists united by the coolest, coincidental event in music history. We hope you’re thrilled with the performance – and all the incredible theatrical experiences we are bringing you in 2016.

There’s even more to tip your hat to! Find out about all the terrific musical, comedic, and dramatic moments this season by talking to any of our staff, or at chemainustheatre.com.